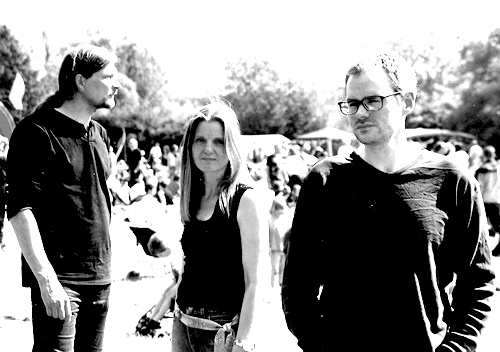 Drift developed from the idea of adding vocals to B So glObal for the still-unreleased third album, and was based around songs that I had co-written with my wife, Bobbie Watson. These were arranged by Richard Hamel in his trademark, ferociously oblique style, and we took them out live with backing tracks of loops and electronica.
Live, I played bass (tuned BEAD) with Drift, which I loved.

Drift is now an occasional project. Originally active between 2000 -2004, we revived Drift in 2011 for a radio broadcast and added drummer Rob Armitage to the line-up.

Depending on what floats your listener boat, you can listen to two tracks from our album, Heterotopia, on the über-groovy Soundcloud player, or the whole ten track album on the slightly more flat-footed Bandcamp version…… 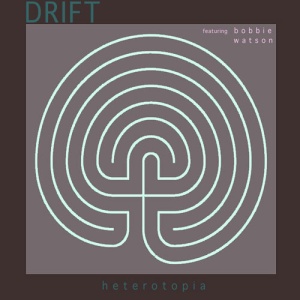 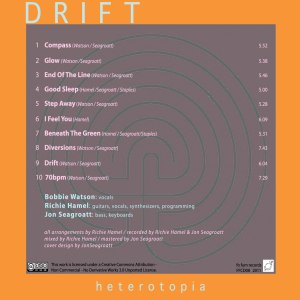 ‘Heterotopia’ is available as a CDr album from Discogs, or as a download from Bandcamp.

The Colins of Paradise 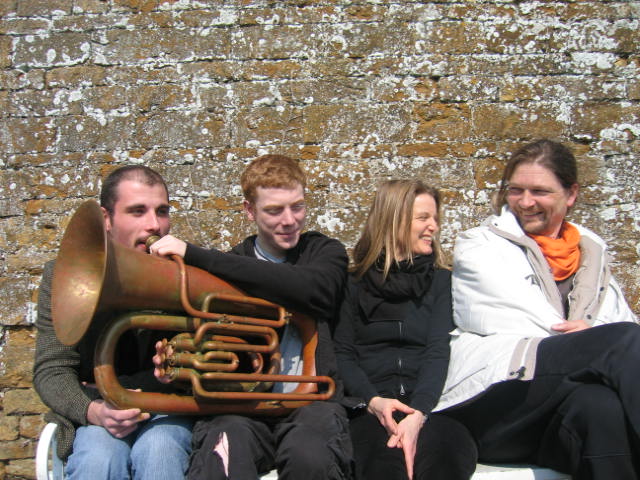 Drift slowly imploded over 2004. Richard developed his own extraordinary solo project ‘Skylon‘, and Bobbie & I felt the need to move ‘uptempo’ and work with a standard full band; Drift had always suffered live from the lack of a drummer…..
We recruited the local powerhouse rhythm section of Ryan Bradshaw and Lee ‘Biff’ Smith and launched the Colins of Paradise.
The CoPs were the band that Bobbie and I were gigging with when Comus reformed. We even took the band and played at the 2008 Melloboat Festival at which Comus performed for the first time in thirty four years.

This was one of the bits of publicity blah I penned at the time:

‘Genre-plundering groove surfers, the Colins of Paradise, are fronted by vocalista Bobbie Watson, who’s iridescent, gravity defying voice we share with legendary psych-folk weirdlings, Comus. Driven by Lee Smith’s bare-knuckled drumming and nailed-down by Ryan Bradshaw’s groove-launching bass lines, the CoPs play a song-based set of original material featuring urban, R&B and nu-jazz grooves laced with periodic eruptions of metal. The CoPs sound is sometimes cool and iced with black notes, and sometimes head-bangingly funky.
Too weird for the straights, too straight for the weirds.’

Regrettably, that final line proved all too prophetic, and the CoPs folded in 2009……

I recorded, mixed and produced both of the tracks below, and played keys, saxes, bass clarinet and flute.

Off The Leafy Pathway 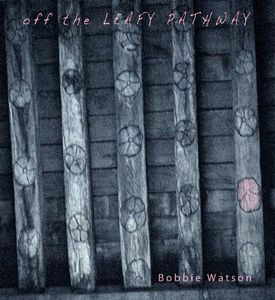 In 2010, Bobbie was asked to compile an album of her music by the record label Reverb Worship.
Bobbie chose a selection of tracks that included a live recording of ‘The Herald’ by Comus, plus some Drift and Colins of Paradise songs, along with a couple of tunes from our old duo project, Tiny Hands. She called the resulting seven track album ‘Off The Leafy Pathway’, and it’s available as a CDr from Discogs or as a Bandcamp download.