“Like the sea when the sand tries to suck it away, I make waves….” 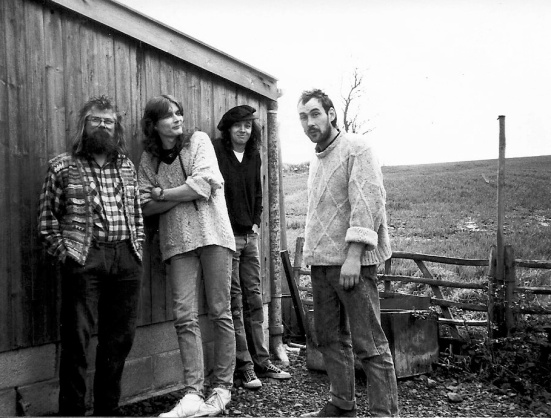 Amongst all the metaphorical loose change, bus tickets, dead wasps etc. that I found down the back of the external hard-drive cushions during a recent spring-clean, I found these little gems; recordings of the Duffs, a fantastic Oxfordshire-based band that I joined in the late 1980s.

The other three members of the band lived on narrowboats on the canals around Banbury at the time. I would drive up from Southend-on-Sea for rehearsals and gigs in a wheezingly decrepit, hand-painted, long-wheelbase Transit that burned oil at such a rate that I had to stop every so often and top up the reservoir.

At some point some footage was shot on VHS of the band at a gig in Banbury. Regrettably, the sound didn’t get recorded, and the tape languished, along with sundry other flowerings of now-defunct technologies, in a box in the attic. In 2021, during a discussion with two of the other former members of the band, I suddenly remembered the tape. I retrieved it, we had it digitalised, and from the gig footage I’ve fashioned the accompanying video of ‘Presence’:

Like the soundtracks to the videos above, the recordings below were made by the legendary and greatly-missed Richard Haynes at Dungeon Studio in Ascott-under-Wychwood, Oxfordshire.

‘Thin Coat’ an eleven track Duffs album is available from Bandcamp as a CD or download.