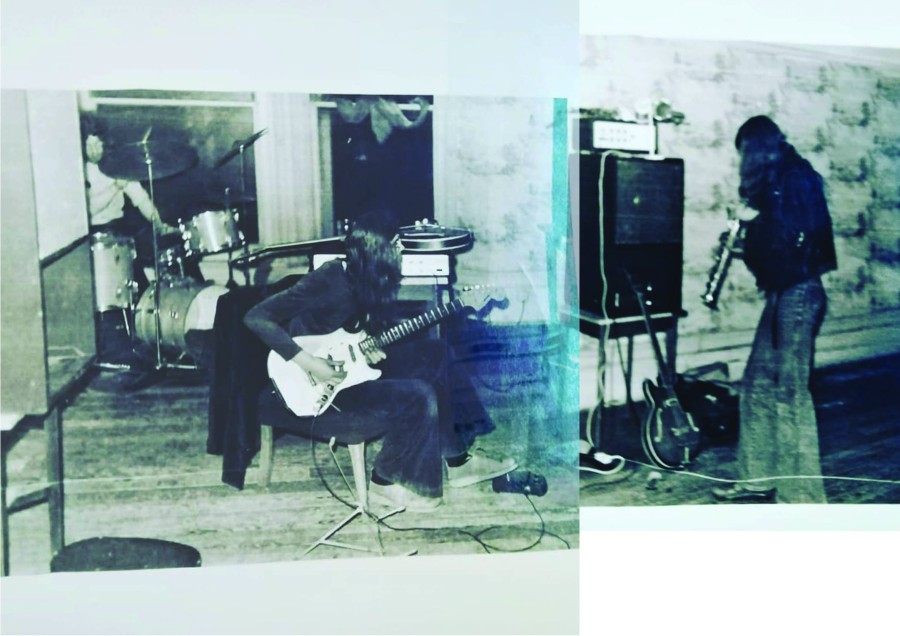 Two pictures of Red Square have recently come to light, courtesy of Graham Burnett, showing us in action in one of the tower rooms of the Queen’s Hotel, Westcliff-on Sea in 1976.
For a while, whilst the future of the Hotel was under review, we played a regular gig there – possibly weekly – until it was closed for good and demolished.
I’ve artfully combined the two together to produce one, spectacular – OK, weirdly-perspectived – action shot.
I was alarmed to note my old Selmer bass clarinet wobbling precariously atop the combo next to me…..and then surprised and intrigued to realise that my first bass guitar was propped up against the speaker cab. I have no recollection of playing it on gigs at this time, but the photograph suggests otherwise……
This is what the Queen’s looked like (before being turned into a car park). We used to play in the first floor tower room; 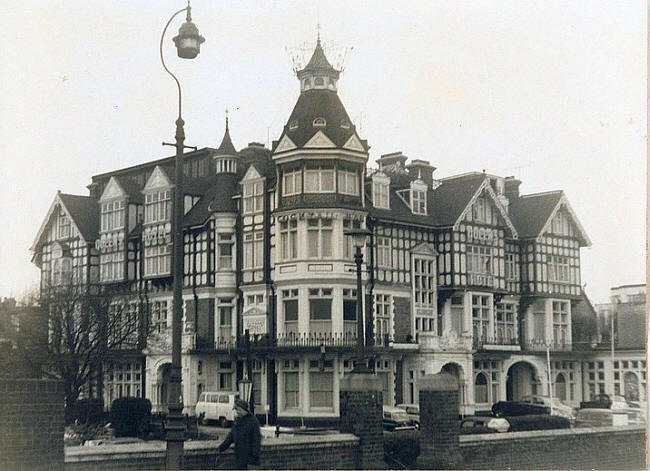 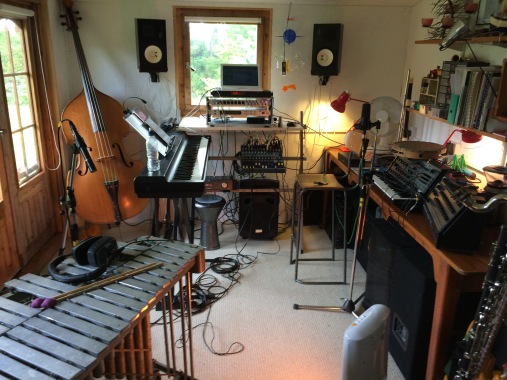 I’ve spend some of this week salted away in the Vendhaus (above), recording parts for two very different projects.

The first was a challenge from the grand maven of everything ’60s, Rosie Cunningham (in her Purson persona), to come up with some ‘Christmas party sax’ (with a dash of Wizzard) for a new Purson song, ‘Chocolate Money’.  I tracked tenor and baritone sax horn section lines and a bit of flapping about on the flootie during the bridge. Roll over, Roy Wood, and pass me that face paint.

The second project is for Chicago’s uber sludge-psychedelicist Steve Krakow (AKA Plastic Crimewave).  Steve asked both Bobbie and me to contribute to a song for a forthcoming album. Steve’s direction was to ‘do whatever’….so that’s what I’m doing. Tracks include Comus-darkened darabuka and ancient-skinned, rusty-jingled tambourine, vibes, tenor recorder, baritone sax and bass clarinet and possibly a further dash of flootie once Bobbie has recorded her vocal parts. I’m a right little Mike Oldfield on the quiet. Or perhaps that should be Roy Castle  😀  (look him up in Guinness’s book of famously fatuous and unnecessary ‘records’).

The Vendhaus vibraphone is a wooden framed 1920’s Premier set. Many moons ago – and long before I acquired it – the resonators would have been driven by a clockwork motor, now, alas, gone. So I suppose that it’s more of a straight metallophone now, lacking the characteristic woo-wooing of a properly tooled-up set of vibes.

Here to finish are a couple more shots of some of the denizens of the Vendhaus.

The Comus recording tambourine, as featured on ‘Out Of The Coma’. God only knows where I got it from. We are actually talking here about a tambourine with a deeply sinister sound…..very Hoxton shamen, I’m sure. 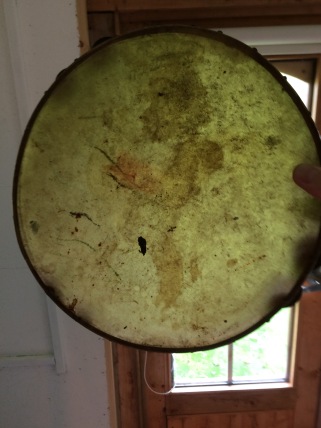 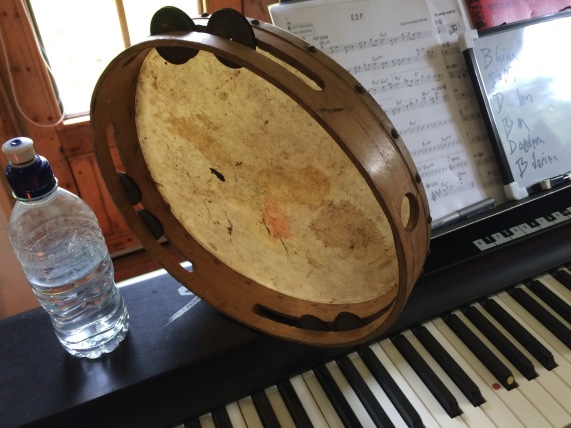 The non woo-wooing Premier vibes (and a pleasing pair of Beyer M201s). 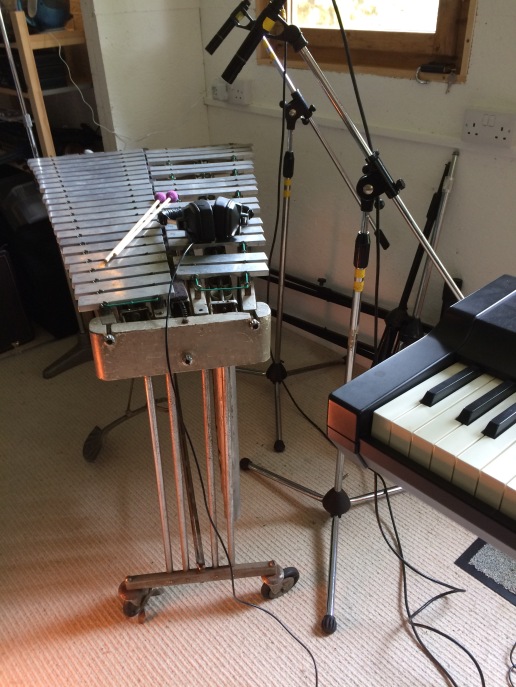 Guerssen’s release of Red Square’s ‘Rare & Lost ’70s Recordings’ has elicited a crop of pleasing and melodiously worded reviews, including from ‘Jazzwise’ and ‘Wire’, august organs of the cognescenti both. Our thanks to Dan Spicer and Stewart Smith.

There have also been a couple of nice on-line pieces from Joseph Neff at ‘Graded On A Curve‘ and Derek Anderson at ‘Derek’s Music Blog‘.

It’s very nice to have a project from so long ago see the light of day again, especially as Red Square was – how shall I put it…? –  not widely appreciated at the time.

Through the good offices of uber-networker and ultra-psychedelicist, Steve Krakow (AKA Plastic Crimewave), Guerssen Records are releasing a selection of our 1970’s recordings under the title ‘Rare and Lost 70s Recordings’. It will be available in all known formats….well apart from 8 track, phonograph cylinder, DAT, mini-disc, cassette and shellac, of course…on April 13th, but you can get the digital download on Bandcamp and iTunes as of today.

You can pre-order vinyl or CD copies direct from Guerssen. The vinyl and CD covers will look something like this: 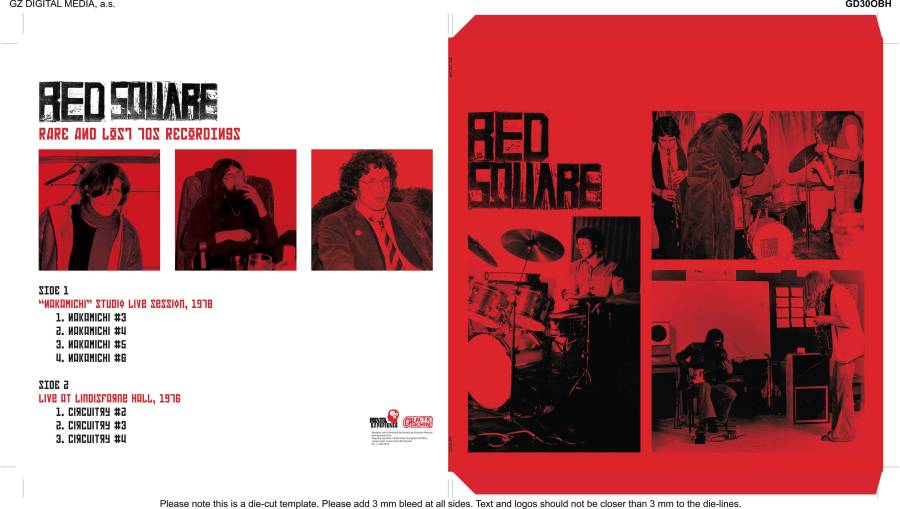 …..and there’s a very natty promo video to whet the appetite on YouTube:

Having recently found, to my surprise, that, between them, the tunes on my Soundcloud page have now had over 5000 plays, I had a look to see which of the tracks had been played the most.

I’ve now compiled a playlist of these (see below). There’s an interestingly heterogeneous mix of styles in the list from avant electro-acoustic, through free-jazz, to weird folk, EDM and anarcho-syndicalist situationism.

Nice to see Red Square, Miramar, the Colins of Paradise & Deathless all making the list…..!

I’ve played on all of the tunes, written or co-written a number of them and mixed and produced (or co-produced) all of them.

Over the course of the last year or so, Colin May, a writer for Oxford’s Nightshift magazine, has come to various gigs that I’ve been involved in around Oxford. He wrote a very nice review of  the live debut of some of the pieces from ‘Deathless‘, and, last time I saw him, I gave him a complementary copy of the album as a ‘thank you’ for the live review.

Colin has taken the trouble to review the album for this month’s edition of Nightshift, and this is what he wrote:

“It’s doubtful whether any local band release will be as mired in blood as this one. Its inspiration is the Minotaur myth as re-imagined by Steven Sherrill in his novel The Minotaur Takes a Cigarette Break, which has the Minotaur escaping the Labyrinth and living in a down-at heal trailer park having suppressed his appetite for a diet of Athenian virgins.

So we’ve got the original legend, Sherrill’s re-telling and Seagroatt and Staples’ take on that re-telling. The pair are renowned improvising musicians, so there’s free improv which is then manipulated and mixed until there are more layers than William and Kate’s wedding cake. You’ve also got a CD that can pose questions about compassion, redemption and forgiveness. Or you can forget about all this and just enjoy the music.

What Seagroatt and Staples have created is  an album of instrumental and manipulated sound without any obvious tunes or hooks.  It’s bookended by a couple of short vocal  pieces, beautifully sung by Bobbie Watson, which describe and comment on Asterion the Minotaur’s situation. On most of the ten tracks  in between Seagroatt’s magnificently lugubrious and pure soprano sax, bass clarinet and flute dominate. There’s almost none of the high-speed parping associated with free jazz, not even on the track ‘The Minotaur Sits Exhausted, Knuckles Skinless, Toes Sticky With Blood, Head In Hands’, a title which seems heaven sent for a bit of parping. Instead Seagroatt, like the late great fellow multi-reeds player Eric Dolphy, dazzles with plaintive lines which he never lets become the musical equivalent of limp soggy lettuce.

Seagroatt’s reeds and Staples’ sparse but  richly atmospheric guitar are integrated with an ominously echoing, rumbling drone soundscape which, like Ariadne’s thread in the Labyrinth, runs through the CD. On a casual listen tracks might seem to be samey, though this would be to ignore the nuances and how the atmosphere builds track by track. To get the max out of this album you probably need to get the headphones on and close your eyes.

This clearly been a labour of love, and Jon Seagroatt has created something that in its way is magnificent in conception and execution, and perhaps unique in the local music landscape”.

How nice is that….? Well very nice indeed. Thanks once again to Colin May.

‘Deathless‘ is available for £10 plus p&p from us via Paypal here, or for £8 you can download the digital version from Bandcamp. You can also listen to a clutch of tracks right here on Soundcloud.

Just discovered the video below on the Incubate Festival page devoted to Current 93’s appearance there next month. It was shot at the Union Chapel launch of C93’s most recent album ‘I Am the Last of All the Field That Fell: A Channel’, and includes two manifestations of tracks from that album. I contribute flute to the first, and bass clarinet to the second.

Despite Bobbie and I only having worked on three tracks for the album, David – as is his way – decided, during the rehearsal for the Union Chapel gig, that we should play / sing throughout the set. This required a bit of fleet-footed key / mode determination, and some high-wire improvisation, but the gig was one of the most satisfying I’ve played in a long time.

Like another friend, Steve Krakow, (AKA Chicago’s very own Plastic Crimewave), DT has fashioned a highly expressive, idiomatic written language. He is very good at the poetic trick of implying networks of meaning between words in a phrase, and over time he has constructed a rich, meaningful relationship with reality from the accretion and layering of arcane, sometimes archaic, religious and hermeneutic ideas.

He is also, famously, a ‘hallucinatory cartoonist at Docetic Mountain’. So not a muso then!

I’m very much looking forward to to playing the Incubate Festival in David’s ‘Final Hallucinatory Patripassianist rock group’ (that’s Current 93 to you and me)………..

I’ve been a bit slack in the update department (for some time!), but having just ‘migrated’ – I do LOVE these tech terms – having just MIGRATED the Comus website to WP I’ve got a bit of wind in my sails, and I thought that I would add a dash of colour and local interest here…..

I’m very pleased that both Bobbie and I will be playing – (in Bobbie’s case, singing) – at Incubate 2014 with David Tibet’s Current 93 this September. Having played on C93’s latest album, ‘I Am The Last Of All The Field That Fell‘, and at the album launch earlier this year at the Union Chapel in London, I am looking forward hugely to weaving bass clarinet and flute darkly back into David Tibet’s poetic chiaroscuro and labyrinthine hermeneutics.

The Festival runs from 15th – 21st September in Tilburg (NL). Below is their very groove-heavy, early Soviet-influenced logo, do please ‘click here’ for details, as suggested……….